How to be alerted to a power outage 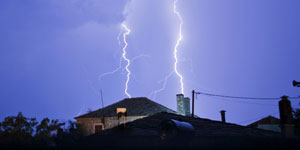 The Charger Alert mobile phone app was created to warn you with an alarm if somebody unplugs your device while it is charging. This also has the positive side-effect of alerting you when there is an electrical power outage while using your charger.

Electrical power failures aren't just an inconvenience, they can cause serious problems where a constant supply of electricity to your property is very important.

There can be many causes of power outages, some of the most common are due to adverse weather such as hurricanes, storms, lightning, and strong winds.

Usually detecting an electrical power cut can be as simple noticing equipment turning off or lights going out while they are in use. However there are times when a power failure can occur while those things aren't being used, for example while you are asleep.

This is where the Charger Alert app can be useful in alerting you to an electrical power failure. Simply activate the charger guard within the app while your mobile phone is charging, and any time the device is unplugged or the power is cut, the Charger Alert app will sound an alarm to warn you.

If you have any neighbors nearby, and it is safe to do so, check to see if they have lost their power too. If they have then it is more than likely that it is a power outage rather than a local electrical fault at your property. Contact your electricity supplier to inform them of the problem.